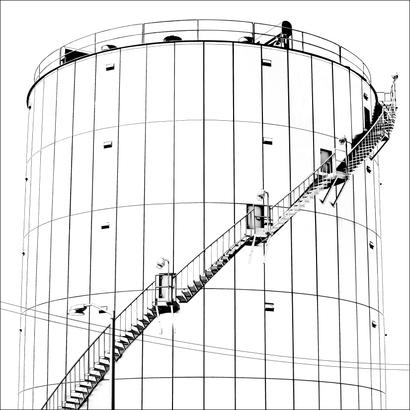 Hasted Kraeutler is pleased to announce an exhibition of photographs by Nathan Harger. This is the artist’s first solo exhibition.

Nathan Harger photographs objects, scenes and spaces in the everyday urban environment such as highways, cranes, bridges, airplanes, power lines, factories and other structures behind the massive forms of production that shape American culture. The earlier works exhibited are grids, which show his conceptual development and his negotiation of the dynamic visual experience of a city [Untitled (Overpass), Queens, NY, 2007]. The recent works are high contrast black-and-white photographs, such as Untitled (Process Tank), Brooklyn, NY, 2010. The industrial spaces in the outer boroughs of New York City, New Jersey and Western Pennsylvania where Harger photographs are not tourist sites; they are often restricted areas around factories, power plants and airports at the fringes of the city.

Born in Cleveland, Ohio in 1976, Nathan Harger received his B.F.A. in photography from the Cleveland Institute of Art. He completed his M.F.A. in photography at Parsons the New School for Design in 2008. His exhibition debut in New York City was in the critically acclaimed exhibition, Contradictions in Black and White, an exhibition that placed his work alongside Irving Penn, Margaret Bourke-White, Walker Evans and Ray K. Metzker in 2009. His work has consistently been featured in several publications including New York Magazine. Harger has been honored as one of Photo District News’ “30 Under 30,” a list of “emerging photographers worth watching,” and has been nominated for the 2009 Santa Fe Prize for photography and the 2010 Prix Pictet. His images were also included in American Photograph’s portfolio of “Images of the Year” for 2008 and Wallpaper Magazine’s “Photo Graduate Directory of 2009.” He was recently included in Aperture Gallery’s exhibition States of Flux. His photographs were acquired by and are in the permanent collection of the Cleveland Museum of Art.