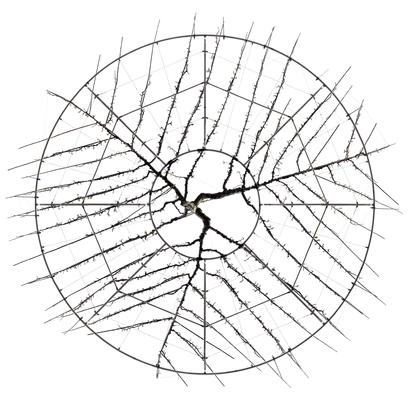 The Japan Series is a body of work that Gefeller created in March and early April 2010 in the Tottori Prefecture of Japan for the European Eyes on Japan/Japan Today photography project. During his time in Japan, Gefeller photographed the elaborate, aboveground power cables that are ubiquitous in the prefecture. When photographing the cables, his perspective was from below, against a white or black sky, as though he was isolating them in a studio. For each work he digitally assembled at least two viewpoints so that the pole disappears and the cables and transformers float in the composition and become abstract. Gefeller writes, “These wildly proliferating formations resemble vegetation in their chaotic growth, yet are always embedded in a superordinate structure. These structures recall calligraphic marks and Japanese letters, a coincidence I gladly welcomed.” The technique and materials, inkjet prints on fine art paper, also encourage the association to calligraphy.

The Japan Series also includes photographs of plants whose forms have been molded by human intervention, such as grape and pear trees and branches on a wall and a pergola. Cherry blossoms for which Japan is famous are scattered on asphalt and a theater stage reveals its use with scuffs and scratches. In this body of work, Gefeller not only conducts an inquiry of reality in digital photography as he did in his Supervisions works, but additionally investigates the relationship between natural growth and construction and the formal qualities of natural and manmade structures. The colors are more muted than in Supervisions; each incident of color, whether it is an orange sticker on a transformer or the shade of pink of a cherry blossom, has been meticulously considered.

The new work is being published by Hatje Cantz in a new monograph, Andreas Gefeller: The Japan Series, with texts by Celina Lunsford  and Christoph Schaden. Pre-release copies of the book will be available at the gallery. The Japan Series has also been published in a catalog, European Eyes on Japan: Japan Today, Vol. 12 (2010). Gefeller has had three other monographs of his work published by Hatje Cantz, Soma (2003), Supervisions (2005) and Photographs (2009).

Andreas Gefeller was born in Düsseldorf, Germany in 1970.
He studied photography at the University of Essen until he graduated with honors in 2000 and was appointed to the German Academy of Photography in 2001. He currently lives and works in Düsseldorf. Andreas Gefeller is represented exclusively by Hasted Kraeutler in the United States. For press inquiries or further information, please contact the gallery at info@hastedkraeutler.com or 212-627-0006.