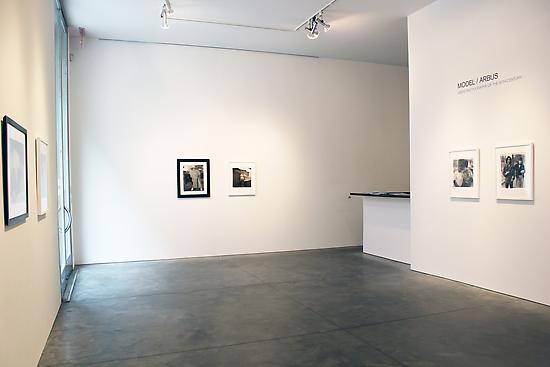 Hasted Kraeutler is pleased to announce MODEL/ARBUS, the gallery’s fourth annual Great Photographs of the 20th Century exhibition. This recurring program is an opportunity for collectors and the public to view important, rare, vintage photographs that would usually be restricted to a museum setting. This year’s curation will exhibit photographs by Lisette Model & Diane Arbus, beginning July 9 and running through August 16, 2013.

Lisette Model (1901-1983) was a teacher, mentor and an essential influence to Diane Arbus (1923-1971), encouraging her to venture outside of her socially privileged circle, igniting her interest in people on the fringe of society. Model introduced Arbus to Hubert’s Dime Museum, which was situated in a basement of Times Square, serving as an inspirational springboard and where she made some of the earliest portraits of those deemed as freaks and social outcasts. Remaining close friends through out their careers, MODEL/ARBUS will present the opportunity to compare works by both world renown artists side by side, revealing the individuality of the century’s most important photographers. Iconic photographs by both artists’ such as Lisette Model’s Coney Island Bather Standing, 1939-1941 and Diane Arbus’s Loser at a Diaper Derby, 1967 will be on view along with rarely exhibited photographs such as Arbus’ Jack Dracula, The Marked Man,NYC, 1961, an intimate portrait of a performer from Hubert’s Dime Museum.

Austrian born, Model is best known for her gestural and instinctive street photography, taking close up shots of dynamic individuals. She developed this style while living in Paris and working for the Communist magazine Regards. Her photographs of French high society men and women lounging about the Promenade des Anglais were published in Regards in 1935, catalyzing her career and solidifying her photographic style. Model moved to New York, post WWI (1938), following the flow of artistic dialogue facilitated by the transatlantic avant-garde movement between Paris and New York. In America, Model nurtured an illustrious commercial career that included working for Harper’s Bazaar and Ladies’ Home Journal, but continued to make photographs for her own oeuvre that never ceased to be unapologetic depictions of the people around her. She then focused her career on teaching photography at San Francisco Institute of Fine Arts and after 1951, at the New School for Social Research in New York City. There, she taught and mentored Arbus.

Arbus started her career as a fashion photographer with her then husband Allen Arbus and after studying under Model, who famously often proclaimed to her students, “Shoot from your gut!” began making the works she is now known for, often referred to as the “photographer of freaks”. Though, at times criticized for being exploitative, the quite personal nature in which her subjects are portrayed, would suggest very much otherwise. Where Model’s subjects are caught in moments, Arbus’ pose for the purpose of the shot, and often look directly into the camera. They are self aware and invite the viewer to look, withstanding their seemingly contrarian social status and aesthetic.
For press inquiries or further information, please contact Hasted Kraeutler at info@hastedkraeutler.com.