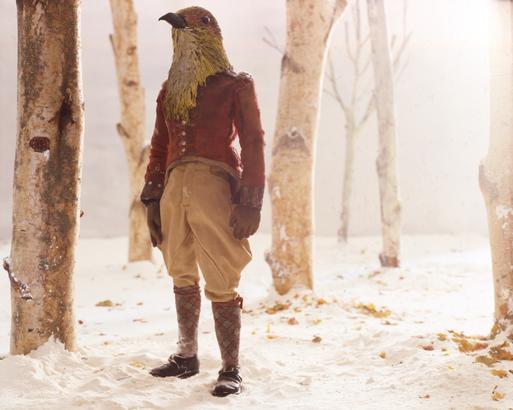 Hasted Hunt Kraeutler is pleased to announce an exhibition of photographs, drawings and watercolors by Paolo Ventura, in conjunction with the release of a new monograph “Winter Stories” (Aperture 2009). There will be a reception for the artist on Wednesday, December 9th from 6 to 8 p.m.

The images in “Winter Stories” are narratives set in a small fictional Tuscan village in the early 1950’s; an imagined place full of dream-like memories. Through the lens of the camera, Ventura captures a unique marriage of storytelling with painting, drawing, and sculpture - all on a reduced scale. The results are intricately detailed and imagined visual scenarios.

These are “make-believe at the most magical, at once sophisticated and sincere; every detail tells a story”. (Vince Aletti. The New Yorker)

“Paolo Ventura has a photographic memory. It’s not that he remembers everything; instead he transforms his memories – and his dreams and imaginings – into photographs. Ventura has imagined the last 20 minutes in the life of a dying man, who shuffles through his own memories like a bundle of photographs”. (Lyle Rexer, Photograph)

This is the first exhibition of Paolo Ventura’s ink drawings and watercolors. Hasted Hunt Kraeutler will also have one of the artist’s unique, hand-made, tabletop installations on view. Ventura designs and fabricates these small-scaled theatrical settings: room interiors, streetscapes and carnival midway, especially to be photographed. The son of a successful children’s book illustrator, Ventura continues a family tradition of creating a whimsical, intricate, fantasy world in his series, “Winter Stories”.

In the introduction to the monograph “Winter Stories”, Eugenia Parry writes that, the artist’s
“Inventiveness comes from remembering. He has an architect’s instinct for the psychological drama in enclosures. A splinter of some thought arrives, as if from nowhere. He seizes it, rolls and unrolls it, turns it like a toy in his hand until every detail he needs to give it a form in space becomes fixed in his head. Apart from the idea’s arrival, he leaves little to chance or suggestion in the construction process. Each scene in “Winter Stories” is the result of Paolo’s agonizing struggle to build an exact replica of his idea … he can work no other way.”

This is Ventura’s third exhibition with Sarah Hasted and W.M. Hunt who are now partnered with Joseph Kraeutler in Hasted Hunt Kraeutler. Mr. Ventura made his international gallery debut with “War Souvenir” in 2006. He has since had major solo shows in Arles, Milan and Rome, Moscow and The Hague.

PHOTO BOOTH: THE MOST MEMORABLE PHOTO SHOWS OF 2010
View More

NEWS FROM THE LIBRARY OF CONGRESS

A VISION OF DARKNESS: BEHIND THIS WEEK'S COVER ART
View More

GOINGS ON ABOUT TOWN: ART - Shortlist