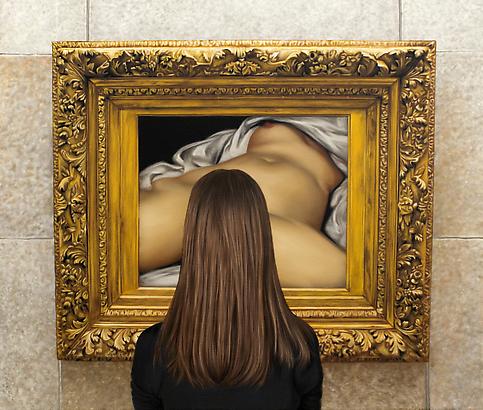 Hasted Kraeutler is pleased to announce An Artist, A Curator And A Rabbi Walk Into A Bar..., an exhibition of new paintings by Marc Dennis, beginning November 8, 2013 and running through February 8, 2014.

The title of the exhibition is a meta-joke (a joke within a joke), referencing the exhibited works, which are often, paintings within paintings. Left purposely without a punch line, the title lends itself to the idea of an endless narrative in which anyone can fill in the blanks and take the concept in any direction, or context. Dennis exposes the glamour, popularity, celebrity, absurdity and seductiveness that is the “art world” with skilled precision and artistic prowess.

Dennis’ paintings are about human behavior, the psychological, spiritual and physical relationships one has with art. Influenced by masters such as Velasquez, Manet, and Magritte, Marc Dennis cleverly combines methods from various movements throughout the western art historical cannon with widely understood cultural signifiers such as cheerleaders, tattoos, clothing style, and contemporary art, indicative of the current times to create his own symbolic language through the use of modern tropes.

In The End of the World, 2013, Dennis depicts a painting within a painting, a technique classic to the Dutch Golden Age. A viewer is seen in front of L’Origine du Monde (The Origin of the World), 1866 by French artist, Gustave Courbet. The subjects within these frames within frames always aim to enhance the viewer’s understanding of a painting. By placing the figure in front of the most provocative and historically controversial part of Courbet’s infamous work, Dennis gives a nod and a wink to the original work.

Marc Dennis’ paintings are in numerous private and public collections, including the collections of Glenn and Amanda Fuhrman, John and Amy Phelan, Beth DeWoody, Jennifer and David Stockman, Larry and Marilyn Fields, Michael Danoff and Jo Laird, the Flag Art Foundation and The Neuberger Berman Collection. His paintings have been exhibited throughout the United States and worldwide. He received his B.F.A. from Tyler School of Art and M.F.A. from The University of Texas at Austin. Born in 1967 in Danvers, Massachusetts, the artist is based in Brooklyn, New York.

Marc Dennis: An Artist, A Curator And A Rabbi Walk Into A Bar...
View More

An Artist, A Rabbi And A Curator Walk Into A Bar... Artist's Reception
View More