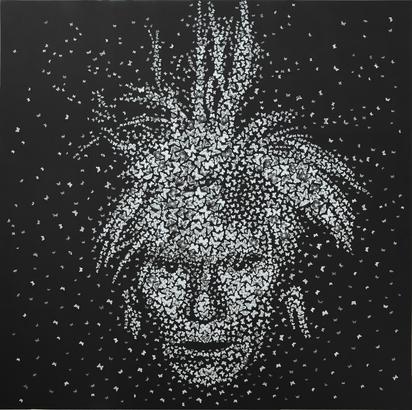 Kim Dong Yoo (b. 1965) has been a celebrated household name in Asia for more than three decades, and has recently garnered a global reputation as a master of painting. Always concerned with the image within the image, Kim Dong Yoo applies an obsessive, perfectionist vision to works that evoke the history of Op Art, and his paintings defy the urge to visually apprehend everything at once. Instead, each composition is composed of various elements and parts, and every “pixel” contains information that is as pertinent as the overall impression it produces. For example, in the series, Double Images, which he began in the mid 1990s, each work offers one vision when viewed from a certain angle, and another vision entirely when seen from a different angle, shifting between images as a viewer moves, and suggesting the subjectivity of experience.

In the renowned series, Face, which he began in the 1980s, using a meticulous, laborious method he himself pioneered, Kim Dong Yoo composes monumental portraits of iconic cultural figures—each one composed of hundreds of hand-painted mini portraits of another icon. Due to their elemental grid of tiny images, which Kim Dong Yoo shades and shadows according to the nuances of the larger portrait he is working toward, these stunning canvases offer the illusion of wholeness from afar, and only fracture into a sea of minute faces when viewed up close.

Beyond the aesthetic interest of these photo-realist mosaic paintings, Kim Dong Yoo's cunning, strategic choices of subject result in compelling and provocative pairings. The works generally depict a star of the American stage and screen, from Audrey Hepburn to Madonna to Gregory Peck, partnered with another vedette who is related to them in ambiguous or controversial ways, literally illustrating the media-generated drama and intrigue that surrounds and often overwhelms the personal lives of celebrities. A soaring, heroic image of John F. Kennedy, for example, is constructed out of hundreds of Marilyn Monroes, while Ingrid Bergman's classic, three-quarter head shot is illustrated by way of Humphrey Bogart's minute likeness.

Referencing the mass-production and propagation of images that was famously explored by Pop artists—Andy Warhol, first and foremost—Kim Dong Yoo's works confound the expected relationship between content and method. The subjects of his paintings are iconic, and their faces have been reproduced millions of times throughout history, in photographs and on T-shirts and posters, from dorm rooms to museums around the world. But Kim Dong Yoo, working for months on end with patient, obsessive repetition, subverts and challenges the idea of the reproduceability of the “icon” by appropriating the image for intricate, one-of-a-kind compositions. In recent years, the Pop Art appearance of Kim Dong Yoo's illustionistic grid paintings has been appropriated by commercial advertising, and even by such photographers as Alex Cao—but Yoo's method, motivation, and masterful skill remain distinctly, exclusively his.