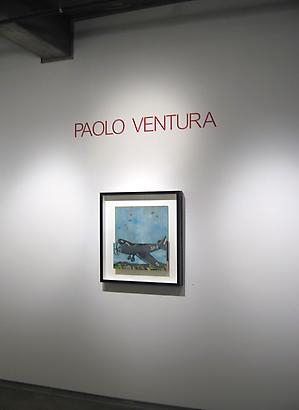 Hasted Hun is pleased to announce Paolo Ventura - "Winter Stories". The exhibition consist of large format color photographic narratives of life in a fictional NOrthern Italian town in the late 1950's. There will be an artist reception and book signing on Thursday, February 26th, from 6 to 8 PM.

"Winter Stories" seem to be the pleasant recollections of a melancholy but dreamlike childhood. The scenes are somber stree-scapes and interiors and cheerier parts of a circus. There are often groups of people who seem not to interact as well as three or four different portagonists who behave like versions of the artist himself returning to his past as a young man. The artist says this series is about "your memory of yourself," the visions that might tumble out during a dying person's last minutes of life.

Not only are these flashbacks imagined fictions bur the actual models and settings are constructions as well. The figures in the photographs costumed and customized by Ventura. The are placed in the detailed tabletop environments he fabricates in his studio.

Ventura has been tellings tories his whole life. At age 11, he would pose his twin brother as a bloodied solider and then photograph him. The artist was also a wanderer who avoided school and would spend his days exploring and making up stories.

Apeture will publish "Winter Stories" in the Fall of 2008. This second exhibition with Hasted Hunt follows hi international gallery debut with "War Souvenir" in 2006, also accompanied by a book of the same title, published by Contrato. Ventura's work is consistently reviewed and featured in publications such as The New Yorker, The New York Times and PDN, as well as many periodicals dedicated to photography. In 2006 he was commissioned for a twelve-issue feature in The New York Times Magazine, illustrating the fiction of the prominent author Michael Connelly. His work as been exhibited internationally, including Moscow, Rome, Aries and Milan. He lives and works in both Brooklyn and MIlan.

BREAKING OUT AT THE AIPAD PHOTOGRAPHY SHOW
View More

Of cameras and commemoration
View More