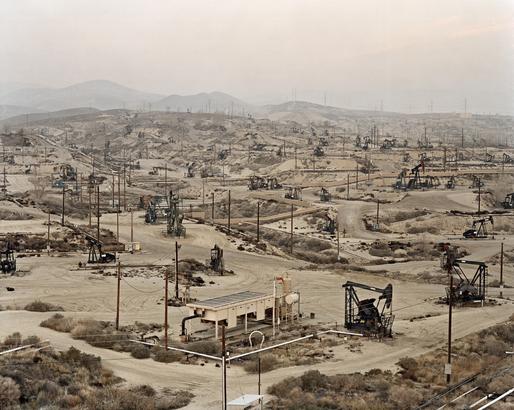 Hasted Hunt Kraeutler is pleased to announce the exclusive representation of Edward Burtynsky in the United States.

Hasted Hunt Kraeutler opens with “Edward Burtynsky: Oil”. The exhibition runs from October 1 until November 28, 2009 with an artist’s reception on Tuesday, October 6th from 6 to 8 p.m. “Oil” consists of a series of large format color images made over the last 12 years. Burtynsky’s obsession with oil began in 1997, when he identified oil as a key building block of the last century - politically, economically and socially - on a global scale. He has tracked this controversial, valuable and increasingly scarce resource from extraction to production to consumption. His obsession with oil has taken him from oil fields to expressways, from Western Canada to Los Angeles to the Middle East.

The New York exhibition at Hasted Hunt Kraeutler is presented in conjunction with the publication and release of the artist’s new monograph “Edward Burtynsky: Oil” (Steidl 2009) and a major museum show at The Corcoran Gallery of Art in Washington DC, which will run contemporaneously.

The artist continues to capture, within his work, the brutal interaction between man and the environment in the production of oil with massive fields and huge refineries. Our enormous consumption is witnessed in huge matrix-like expressways and dumping grounds for tires. The impact and scale of Burtynsky’s work is sizable. He works with a sensibility and appreciation of nature that is contemporary, yet in the tradition of Carleton Watkins and Timothy O’Sullivan.

In his essay for the new monograph, Paul Roth, Curator of Photography and Media Arts at the Corcoran Gallery of Art offers,

“This is a new form of epic history painting. Turning his camera lens to a fever dream, Burtynsky forges a new mythology for
the 21st century from the lexicon of realism. With stunning detail, from improbable perches, in strange and beautiful colors,
these pictures show their subjects with clinical accuracy, and with definitive force. But they also tell a parallel and more
inchoate tale: a critique of civilization, and a foretelling of human ends.”

That same year, Mr. Burtynsky was named Officer of the Order of Canada. He is the recipient of three honorary doctorates, and the esteemed TED prize, the Rencontres d’Arles Outreach award, as well as the Roloff Beny Book award. He is a finalist for The Financial Times Prix Pictet, to be announced in November 2009. He chairs the board of directors of the high profile online sustainability magazine Worldchanging, and sits on the board of CONTACT, the international festival of photography in Toronto, where he is based.

For visuals or more information, please contact the gallery at info@hastedhuntkraeutler.com.

INTERVIEW WITH EDWARD BURTYNSKY: PHOTOGRAPHING A PLANET ON THE EDGE
View More

HE WORKS IN OILS
View More

FROM EXTRACTION TO CONSUMPTION: OIL, AN EXHIBITION BY EDWARD BURTYNSKY
View More