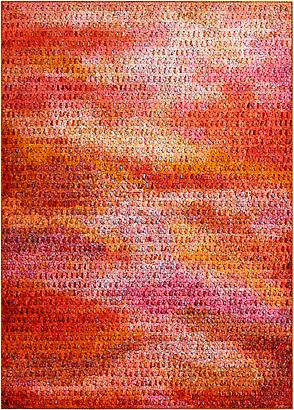 Hasted Kraeutler is pleased to announce an exhibition of new works by Kwang Young Chun, beginning September 4 and running through November 8, 2014.

Celebrating his 70th birthday this year, Korean artist Kwang Young Chun has gained global recognition as a contemporary master of paper. This self titled exhibition, is organized to celebrate four decades of the artist’s impressive career. Opening in conjunction with the release of his new monograph, Mulberry Mindscapes (Rizzoli, 2014), which presents a new suite of enormous works from his famed Aggregation series, begun in the 1990s.

Since the inception of Chun’s Aggregations, the artist has meticulously constructed these striking, textured compositions by affixing hundreds of hand-cut polystyrene triangles, each one individually wrapped in Korean mulberry paper (hanji), to canvas, plumbing the sculptural potential of ostensibly two-dimensional wall works. In the newest iterations of these hypnotic, visually baffling creations, rippling, sensuous exteriors fuse into waves of color that surge and recede before viewers’ eyes as though touched by the sun and blown by the wind. Their surfaces are networks of intersecting parts—each of which stands alone as an object of visual interest—that seethe and surge together when viewed from afar, coalescing into aerial views of natural phenomena that occasionally touch on the cosmic. They recall, at turns, undulating fields of flowers seen from the sky, gardens of underwater coral, or the scarred surface of the moon, and manage to appear finely, preciously modeled—the result of great care and extreme precision—and roughly hewn, evoking a rocky mountainside or the raw, chiseled façade of a medieval building.

Both ethereal and earthly, Chun’s newest creations are also shaped by a specifically contemporary sensibility, integrating patterns that crackle and repeat with the insistence of computer code or television pixels. At the same time, they harken back to a long history of human creation—recalling historic fossils and even the legendary caves of Lascaux. Chun has described the paper he uses to create each work’s constituent sea of small polystyrene packages, often including pages torn from ancient and contemporary Korean texts, as representing “a type of information, a product of human knowledge and experience.” Joining the artist’s long history of production as consistent as it is surprising, these new works effectively offer a visual and perceptual experience that is fresh and timeless at once, rooted in artisanal tradition while transcending the limitations of its own materiality.

Born in 1944 in Hongchun, Korea, Kwang Young Chun has exhibited widely in Korea and internationally since 1966. His works have been acquired by, and are included in esteemed public collections, such as the Rockfeller Foundation in New York, The Victoria and Albert Museum in England, Woodrow Wilson International Center in Washington D.C., United Nations headquarters in New York, National Museum of Contemporary Art in Seoul, Philadelphia Society Building, Seoul Museum of Art, National Gallery of Australia at Canberra, Fidelity Investments Boston, Museum KUNSTWERK in Germany, and Busan Metropolitan Art Museum, among others.