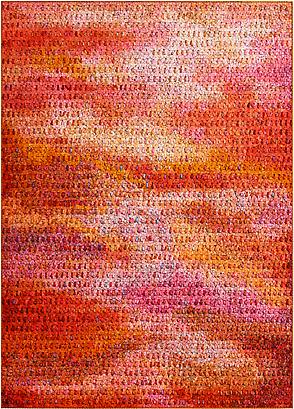 Korean artist Kwang Young Chun (b. 1944) has gained global recognition as a contemporary master of paper. Featuring hand-cut triangles of polystyrene individually wrapped in delicate pages torn from Korean texts, his striking textured canvases and monumental organic sculptures have rippling, sensuous exteriors that evoke the surface of the moon. Much like leading German artist Anselm Kiefer, Chun elevates the most humble of materials into his breathtaking compositions, which transcend their constituent elements and evoke universal aspects of the human condition, though they are shaped by a specifically Korean sense of culture and tradition.

Looking back on his stellar career, Chun recalls the moment that gave birth to his signature aesthetic and technique as some time in the mid 1990s, while he was sick in bed. Reaching for a package of pills wrapped in thin paper, he was suddenly transported back in time to the office of a Chinese doctor he saw as a child, where small sacks of mulberry-paper-wrapped herbs hung from the ceiling. The image of those carefully wrapped packages has proven fundamental to his practice. At once ethereal and firmly rooted in the world of earthly, organic delights, his large objects may appear to hover above the ground like an enormous bee hive or a cosmic bird’s nest, or to explode from the earth’s core like a surge of lava. Viewed up close, however, they reveal themselves as markedly informed by the intellect, encased in book pages both modern and ancient that reference the long trajectory of human history. “The paper bags of Chinese medicine become information the moment the doctor writes their name on it,” he says. “The package I fumbled with on that afternoon is a type of information, a product of human knowledge and experience.”

Chun moved to the United States in the mid-60s, and was immediately drawn to Abstract Expressionism. The movement’s embrace of unresolved tensions, and its juxtapositions of interiority and exteriority, abstraction and figuration, texture and color, reflected his own conflicting impulses and influences. In the ensuing decades, he has incorporated the methods, materials, and sentiments of his heritage into the liberated space he discovered in the U.S., bridging sculpture and painting, and merging a deeply ingrained respect for history with a distinctly contemporary visual language.

Kwang Young Chun received his B.F.A from Korea’s Hong-Ik Univeristy, and has an M.F.A from the Philadelphia College of Art. In the Fall of 2015, Paperdome Art Museum is slated to open. The museum will illuminate international emerging and established artists, working in various fields, and has acquired many of Kwang Young Chun’s works into the permanent collection. Recent major solo museum exhibitions include the Museum of Art Seoul National University (2013) and the Knoxville Museum of Art (2011). In the fall of 2012, the Museum Kunstwerk presented “The Poetry of Materials,” the artist’s first exhibition in Germany, which featured his sculptures alongside works by famed German artist Anselm Kiefer. In 2009, Chun created his largest free-standing paper sculpture to date—just over 14 feet and approximately 650 pounds—for a site-specific presentation at The Aldrich Contemporary Art Museum.

Kwang Young Chun’s works have been acquired by, and are included in esteemed public collections, such as the Rockfeller Foundation in New York, The Victoria and Albert Museum in England, Woodrow Wilson International Center in Washington D.C., United Nations headquarters in New York, National Museum of Contemporary Art in Seoul, Philadelphia Society Building, Seoul Museum of Art, National Gallery of Australia at Canberra, Fidelity Investments Boston, Museum Kunstwerk in Germany, and Busan Metropolitan Art Museum, among others. He has received numerous awards and was named artist of the year by The National Museum of Contemporary Art, Seoul, in 2001. In 2009, he was awarded the Presidential prize in the 41st Korean Culture and Art Prize by the Ministry of Culture, Sports and Tourism in Korea.

The Perfect Shape for an unusual space
View More