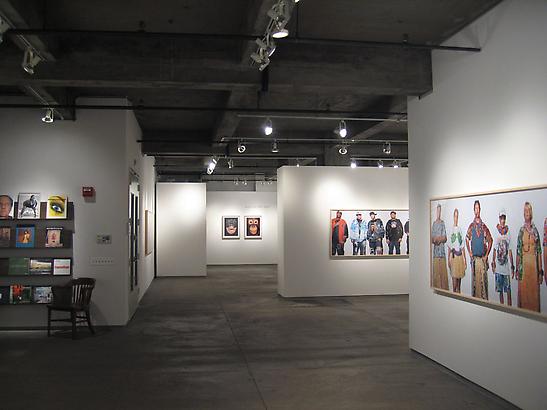 Hasted Hunt is pleased to announce James Mollison, “The Disciples,” panoramic format portraits of music fans photographed as they leave performances.   The groups are distinctive because they have dressed in the style of the singers or bands they have just been watching.   The exhibition runs from June 12 to August 16, 2008.  There will a reception for the artist on Thursday, June 12th from 6 to 8PM.  This is James Mollison’s international gallery debut.

The “Disciples” are “fans” all seemingly caught at the same moment in front of a seamless background as they leave concerts ranging from Marilyn Manson to Dolly Parton.  The images bear a keen relationship to Richard Avedon’s classic group portraits of the Chicago Seven and the Joint Chiefs.

Mollison’s works have unique ebullience and slyness.  They behave as entertainments as well as cultural documents.  The artist is “fascinated by the different tribes of people that attend them, and how people emulate celebrity when forming their identity, as they to come together with surrogate ‘families’.”

He is best known for his long-term project, James and Other Apes which debuted at the Rencontres d’Arles.  That show was subsequently exhibited at the Natural History Museum in London and in Florence, Liverpool, Stockholm, The Hague and Sydney and was published in 2004.

Writing about “The Disciples”, David Schonauer of American Photo compares the Jimmy Buffet concertgoers to the Rod Stewart followers, “In his ape pictures, Mollison invited us to view groups of animals as individuals; in this work, he asks us to look at individuals as members of larger groups. By doing so, he reveals the tribalism that has always been part of rock and roll idolatry.”

The Disciples will be published in October 2008 by Chris Boot, Inc. who also published James and Other Apes as well as The Memory of Pablo Escobar, the extraordinary story of “the richest and most violent gangster in history” told through hundreds of photographs gathered by the artist.

Mollison lives in Venice.  He was born in Kenya in 1973 and grew up in England. After studying Art and Design at Oxford Brookes University, and later film and photography at Newport School of Art and Design, he moved to Italy to work at Benetton’s creative lab, Fabrica. His work has been widely published throughout the world including by Colors, The New York Times Magazine, The Guardian, The Paris Review, The New Yorker and Le Monde.

For visuals or more information, please contact the gallery at 212 627-0006 or info@hastedhunt.com.