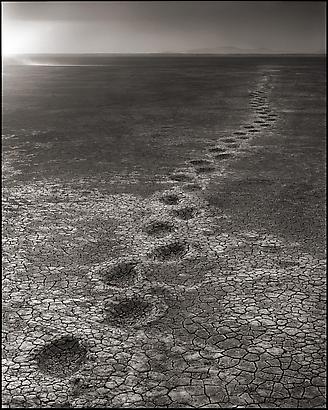 Hasted Kraeutler is pleased to announce Across The Ravaged Land, an exhibition of photographs by Nick Brandt, beginning September 5 and running through November 2, 2013.

Across The Ravaged Land is the third and final volume in Nick Brandt’s trilogy documenting the disappearing natural world and animals of Africa, Following On This Earth, A Shadow Falls. The artworks in this exhibition offers a darker vision of a world still filled with stunning beauty, but now fast disappearing at the hands of man.

Nick Brandt photographs his subjects, “in the same way I would a human being, watching for the right ‘pose’ that hopefully will best capture his or her spirit.” “What I am interested in is showing the animals simply in the state of Being. In the state of Being before they ‘no longer are.’ Before, in the wild at least, they cease to exist. This world is under terrible threat, all of it caused by us. To me, every creature, human or nonhuman, has an equal right to live, and this feeling, this belief that every animal and I are equal, affects me every time I frame an animal in my camera. The photos are my elegy to these beautiful creatures, to this wrenchingly beautiful world that is steadily, tragically, vanishing before our eyes.”

Nick Brandt has been photographing endangered animals in Africa for over a decade, and was first drawn there in 1995 when he went to Tanzania to direct Michael Jackson’s, “Earth Song” video. Deeply moved by the experience he searched for a way to capture and preserve what he was seeing.

In addition to his starkly powerful animal portraits, Across the Ravaged Land features haunting and evocative portraits depicting the rangers employed by Nick Brandt’s foundation, Big Life, empowered to protect the animals. Brandt also “repopulates” the epic landscape with remains of animals that he finds or introduces, including hunters’ trophy heads looking out over the lands where they once roamed, and preserved birds and bats calcified in soda lakes, appearing to pose for their portraits, alive again in death.

“Over the years, there have been many questions regarding the work I do on the photographs after scanning the negatives. Some people think that the scenes could only have been conjured up through postproduction artifice. However, I have always found that with quite endless amounts of patience and luck, the natural world will eventually, unexpectedly provide you with something far better than your imagination–courtesy of Photoshop or the equivalent–could come up with.” - Nick Brandt

Brandt does not use telephoto lenses because he believes that being close to the animals makes a huge difference in his ability to reveal their personality. He writes: “You wouldn’t take a portrait of a human being from a hundred feet away and expect to capture their spirit; you’d move in close.” Sometimes it can take weeks for Nick Brandt to get a single photograph, but it is this patience that allows him to be able to get close enough to the animals he is photographing and capture them as individuals, often times just weeks before they are killed by poachers.

Nick Brandt’s works have been acquired and exhibited by prominent collections including, Fotografiska Museum, Sweden; Dunkers Kulturhus Museum, Sweden; Preus National Museum of Photography, Norway; and The Museum on The Seam, Israel; among others. Four monographs of Nick Brandt’s work have been published: On This Earth (Chronicle Books, 2005), A Shadow Falls (Abrams, 2009), On This Earth, A Shadow Falls (Big Life Editions, 2010/ Abrams, 2012) and Across The Ravaged Land (Abrams, 2013).

Across The Ravaged Land

In the Face of Death
View More