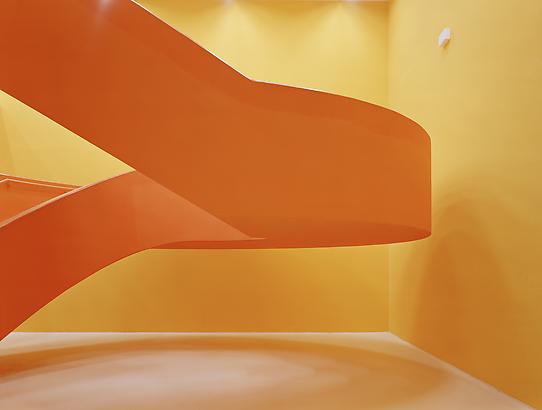 German artist Julian Faulhaber (b. 1975) is the epitome of the postmodern photographer, following the medium's controversial depths in order to bring to light its dual, seemingly contradictory abilities: both to record the truth accurately and authentically, and to manipulate and misconstrue the world it captures. In his vibrant, pristine compositions, saturated colors and an almost hallucinogenic clarity of focus lend such real-life, locales such as a gas station or a commercial conference room the uncanny appearance of a computer generated rendering.

Wryly toeing the line between reality and artifice, Faulhaber explores photography's power to distort, rendering actual objects and settings in a way that may be interpreted as ambiguous or constructed. Indeed, his work places him squarely within the trajectory of his predecessors, from the tradition of German photography, which considers the investigation of architectural forms to be important social commentary and includes Albert Renger-Patsch, Bernd and Hilla Becher, and Andreas Gursky, to Laurie Simmons, all of whom have spent the decades since the medium's invention grappling with its potential. Initially, in fact, the art world celebrated photography's capacity for “truthful” representation; but with time and the development of new technologies, their understanding of its power evolved, and they began to harness and explore its presumed “accuracy” with the express intention of turning it around on itself.

With their surreal sheen, bright colors, and perplexingly toy-like qualities, Faulhaber's images appear to bridge abstraction and documentation, existing as some kind of hybrid between the two. Much in the vein of famed German photographer Thomas Demand, who crafts meticulous miniature sets entirely from paper and then photographs them in order to evoke real life locations, Faulhaber, too, plays with our human ability to distinguish the real from the fake. Faulhaber photographs spaces “in the brief poignant moment of perfection between their completion by the contractors and the arrival of the first users.” Devoid of human presence, the images he creates represent what he describes as “aggregations of spotlessness,” and they appear at first glance too perfect, to spare, to sterile, to be anything other than fabrication. But, in yet another reversal of expectations, they are in fact absolutely true to life, depicting actual places as they exist in the world, they have never been manipulated during postproduction. In this way, the artist's images express an inhuman, almost dystopian aspect of the environments we create for ourselves, suggesting the impersonal nature of modern existence.

Julian Faulhaber was born in Würzburg, Germany and studied photography at the University for Photography in Dortmund, Germany. He made his New York debut in the First New York Photo Festival in DUMBO in Chisel, curated in by Kathy Ryan. Ryan, director of photography for The New York Times Magazine has commissioned Faulhaber several times, in New York, Denmark and Spain. He has had solo gallery exhibitions in New York, Frankfurt and Dresden and has been the recipient of a number of awards in Europe, including Reinhart-Wolf-Preis 2006 and a nomination for the ING Real Photography Award, for which he was a finalist in 2008.

Faulhaber’s has been acquired and is the permanent collection of the Metropolitan Museum of Art, where his work has exhibited alongside Gregory Crewdson, David Levinthal, Vik Muniz, and Stephen Shore in the critically acclaimed exhibition Reality Check. His works are also in the permanent collections of the Princeton University Art Museum, the Harvard Art Museum, DZ Bank AG, Frankfurt am Main, Germany, and ING, The Netherlands, among others.

LAND OF TULIPS: THIS MUST BE HOLLAND
View More