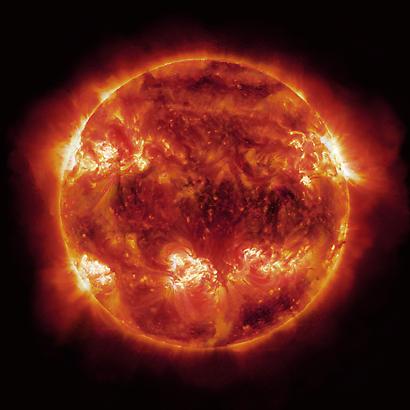 Michael Benson (b. 1962) has emerged as aerospace's most prolific photographer, creating elegantly curated collections of images that give esthetic form and shape to science's most baffling, poetic realities. Described as a “visual stylist with a gift for framing and focus,” he creates intensely detailed views of the solar system culled from enormous archives of raw image data, often in the form of black and white composites taken by space probes, or rovers.

After perusing hundreds and even thousands of these files, he selects subjects or textures that interest him and stitches them together to create otherworldly abstract landscapes, just as David Hockney stitches together numerous images to create photocollages like Pearblossom Highway, 11-18th April, 1986. Benson’s compositions are assemblage —unified, naturalistically colored landscapes that result from a complex process of filtering, expressing at once a sequence of perspectives, filtered through his own color correction system to create a spectrum that approximates how these interstellar vistas would appear to the human eye.

The resulting images are vast, seething expanses of volcanic color and gesture; pocked, dappled surfaces that evoke the moon or smooth rivulets recalling riverbeds. Colors are hypnotic, and compositions suggest the grain of wood or the puckered skein of hot milk. Much as the famed photographer Andreas Gursky brings familiar, recognizable landscapes and locations into razor-sharp focus, so does Benson invite his audience to enjoy his photographs of Mars, Jupiter, or Saturn, as congregations of shape, color, and texture that they have never before seen. Although he works with photography, his method is akin to that of any contemporary artist: he elevates and hones in on the concrete phenomena of the world, bringing it to our attention new ways. His cosmic abstractions provoke viewers to marvel at the potential of the human eye, the innovation of nature, and the power of technology, to apprehend them not for what they depict, but for the formal wonder and novelty that they offer the human eye.

Beyond their esthetic interest, Benson's work forces viewers to confront ideas of authorship in an increasingly technological age. As Dana Jennings wrote in the New York Times, “In these photos we’re not just gazing at lunar barrens and the dunes and lakes of Titan, a moon of Saturn, but also, in a sense, looking at ourselves, turning the solar system into a mirror of human achievement.”

A photographer, writer, and filmmaker, Benson studied photography as an undergraduate at SUNY-Albany and attended NYU Graduate Film School. Benson has been working with planetary photography since the early 2000s. His photographs have been widely exhibited internationally, including in museums such as the Smithsonian Institution, and have been published in three books, Beyond: Visions of the Interplanetary Probes (Harry N. Abrams, 2003), Far Out: A Space-Time Chronicle (Harry N. Abrams, 2009) and Planetfall: New Solar System Visions (Harry N. Abrams, 2012). He recently worked with director Terrence Malick to help produce space and cosmology sequences for Malick’s film Tree of Life, which drew in part from Benson’s book and exhibition projects. The film won the Palm d’Or at the 2011 Cannes Film Festival. Benson is currently working on a fifth book for Abrams, pertaining to electron microscope photography, titled Nanocosmos.

A Scrapbook of Our Relationship With the Universe
View More

Beyond the Known
View More

The Solar System revolves around Chelsea this month
View More

BOLDLY GOING WHERE NO ARTIST HAS GONE BEFORE: MICHAEL BENSON
View More

Marveling at Wonders Out of This World
View More

‘Beyond: Visions of Our Solar System’ exhibit at the Air and Space Museum
View More

From Beyond
View More

'Far Out: A Space-Time Chronicle' by Michael Benson
View More

A Space in Time
View More