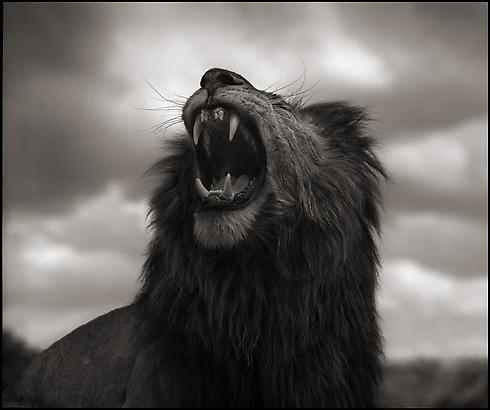 British photographer Nick Brandt (b. 1966) is celebrated for stark, stunning, and shockingly intimate portraits of subjects many viewers have never seen up close: the endangered animal populations that inhabit the desert terrain of Kenya and Tanzania. Inspired initially by a trip to Tanzania he made in 1995, working at the time as the director of Michael Jackson's Earth Song music video, Brandt has continued to devote his time and talent to what has become his life's work: immortalizing through photography the disappearing fauna and natural landscapes of the African continent.

Offering a moving tribute to a world whose stunning beauty and diversity is quickly fading, Brandt's haunting and evocative images are made without the telephoto lenses usually employed by photographers, and they do not feature action shots. Instead, the artist will sometimes invest days, and even weeks, patiently awaiting the moment a pride of lions or a mother elephant allows him to approach, and then carefully composing tight, meticulously framed portraits which illuminate the breathtaking details of a spotted coat. “You wouldn’t take a portrait of a human being from a hundred feet away and expect to capture their spirit,” the artist says. “You’d move in close.” And so he does just that. His resulting photographs are suffused with a deep, abiding respect for the living soul of the animals he captures, depicting them not as representatives of a species but rather as individuals—and oftentimes capturing their existence days before they are killed by poachers.

Brandt also pays tribute to the spirits of animals past, composing images that exist as memento mori, or symbolic reminders of the inevitability of death. For these works, which glow with the warm, sepia-toned light of nostalgia, the photographer “repopulates” the epic landscape with the remains of his former subjects—preserved birds and bats, or the bones of decaying carcasses—breathing new life into their memory and re-animating them as invaluable members of this planet's population, even in death.

Nick Brandt was born in London, and he studied painting at St. Martins School of Art. His works have been acquired and exhibited by prominent collections including 21c Museum Hotels, USA; Fotografiska Museum, Sweden; Dunkers Kulturhus Museum, Sweden; Preus National Museum of Photography, Norway; and The Museum on The Seam, Israel; among others. Four monographs of his work have been published: On This Earth (Chronicle Books, 2005), A Shadow Falls (Abrams, 2009), On This Earth, A Shadow Falls (Big Life Editions, 2010/ Abrams, 2012) and Across The Ravaged Land (Abrams, 2013).

ACROSS THE RAVAGED LAND
View More

On This Earth, A Shadow Falls
View More

In the Face of Death
View More

Nick Brandt: On this Earth, A Shadow Falls
View More

PDN : Photo of the day

A Portrait of an Elephant
View More

"A Menagerie of Metaphors" at the Maier Museum of Art.
View More

On this earth, a shadow falls, Artist reception
View More

Across The Ravaged Land

ON THIS EARTH, A SHADOW FALLS