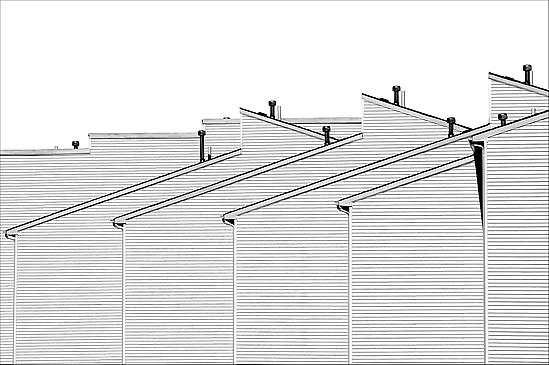 Following in the hallowed tradition pioneered by German photographers Bernd and Hilla Becher, Cleveland artist Nathan Harger (b. 1976) creates starkly expressive black and white compositions that explore the industrial American landscape through the lens of a camera. The factories, cranes, power plants, bridges and highways he shoots represent this country's industrialized forms of production. But rather than engage critically with those subjects to offer social commentary about a capitalist, consumer society, Harger approaches image making with a markedly formal, aesthetic approach—and his harmonious compositions explore the beauty that can be derived from industrial structures when they are treated exclusively as graphic elements.

Harger's earliest works directly referenced the “typologies” of disappearing German architecture created by the Bechers by featuring photographic grids that echo the dynamic visual experience of city living. Now, his more recent images demonstrate an evolution in style and method that aligns him more closely with the great Abstract Expressionist photographer Aaron Siskind, celebrated for transmuting formerly familiar objects and locations into striking abstractions that are no longer legible as what they are. Rather than signify in figurative terms, Harger's images evoke by way of gesture and form—photographic equivalents of Franz Kline's dramatic, spontaneous monochromes and the reductive dynamism of Robert Motherwell's spare compositions.

Working in a similar vein, Harger uses photographic techniques that eliminate gray tones and reduce represented images to dramatic contrasts of white and black, depriving them of their symbolic associations and presenting them instead as simple studies of texture, shadow, and form. He also removes the “background” from the photographs he takes, thereby displacing their subjects from context both literally and figuratively, and imbuing them with the gestural energy and impression of a calligraphic stroke or a work of Minimalist sculpture.

Nathan Harger received his B.F.A. in photography from the Cleveland Institute of Art, and he completed his M.F.A. in photography at Parsons School for Design in 2008. His work has consistently been featured in publications including Artforum, New York Magazine, The Architect’s Newspaper, The Paris Review, and he was honored by Photo District News as one of their “30 Under 30,” a list of “emerging photographers worth watching.” He has been nominated for numerous art prizes, such as the 2009 Santa Fe Prize for photography and the 2010 Prix Pictet. His photographs were included in American Photograph’s portfolio of “Images of the Year” for 2008, as well as in Wallpaper Magazine’s “Photo Graduate Directory of 2009.” His solo exhibition at Hasted Kraeutler in 2010 received much acclaim, and his photographs are in the permanent collection of the Cleveland Museum of Art, Cleveland, Ohio, Martin Margulies Collection, Miami, Florida, and Vertical Screen Inc., Warminster, Pennsylvania

The Contradictions and Aesthetics of Black and White
View More

A City Intersection Can Be Beautiful
View More

A Car That Drives On the White Lanes
View More

Photo of the Day
View More

No. 29: Because The Ghastliest Highway Imaginable Can Become a Muse
View More

PARIS, BEFORE THE LIGHT - AND OTHER SHOWS WORTH SEEING IN NEW YORK
View More

LIVE FROM NEW YORK, IT'S A HELLUVA TOWN!
View More

NATHAN HARGER IN PERMANENT COLLECTION OF CLEVELAND MUSEUM OF ART