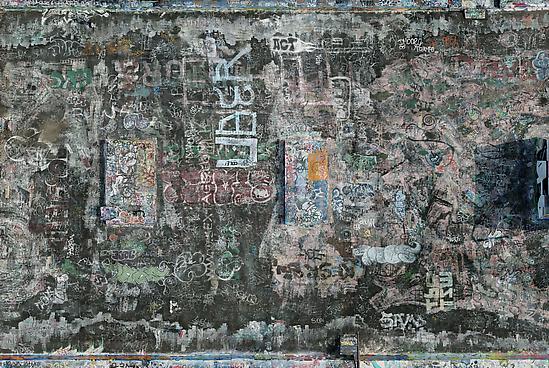 Dusseldorf-based photographer Andreas Gefeller (b. 1970) is known for his stunningly complex photographic tapestries, which engage photography's enduring yet controversial juxtaposition of fiction and truth. His massive, chaotic images depict, with laser-like focus, the details of streets and public spaces, drawing them into three dimensions and lending them the complex, frenetic energy of the cosmos.

Indeed, Gefeller attributes his discovery of the camera to a childhood obsession with astronomy, a fascination with the formerly invisible surfaces of planets and moons—surfaces made visible by the telescope's light and lens. He has since spent his career investigating the details of the surfaces of our lives; bits of brightly colored garbage and cigarette butts caught in a sidewalk drain, or the pattern of a hotel's balconies viewed from the beach. His interest in illuminating things we tend not to see, even when they are in front of our eyes, has been a recurring theme throughout his work. In Halbwertszeiten, an early series from 1996, he took photographs of deserted homes and streets after the Chernobyl disaster, giving photographic form to the radioactive energy we cannot see, but know is present. In Soma, he used his camera to capture the colors undetectable to the human eye at night, revealing the world of the dark more truthfully than we have ever known it. “In this case,” the artist has said, “our eyes show a false picture of the world, not the camera.”

Working along those lines, Gefeller is perhaps best known for his Supervisions images, which he began in 2002. The series was inspired by a lunch-time picnic on the Rhine, during which he happened to play with his camera and snap dozens of pictures of the ground. When he got home, he combined numerous cut-out images from the contact sheet into a single collage—literally representing all perspectival planes at once and creating stunning aerial views that made him feel like he was flying. Intent upon achieving that same impression, he began to take thousands of exposures of the same space or object, always shot from above at varying heights, and then stitching them together.

The massive, chaotic pastiches of texture and shape that result offer disorienting effects of spatial and chronological distortion. They are, therefore, partially an illusion—a misleading collage of varying visual perspectives captured over an indeterminate period of time, presented to the viewer as one image. On the other hand, everything in his photographs was actually there, and nothing has been deleted or added. In this way, Gefeller's technique wryly, provocatively recalls photography's vast and complex history, and engages the medium's most enduring and salient controversy: its ability to manipulate, represent, and document, all at once. Indeed, he taps into conversation initiated by the development of long-exposure daguerreotypes, extended by Andreas Gursky's wide-frame quotidian landscapes that manage to never lose focus despite depicting enormities of space, and drawn into Jeff Wall's highly staged yet “candid” compositions.

Andreas Gefeller lives and works in Düsseldorf, Germany. He studied photography at the University of Essen and was appointed to the German Academy of Photography in 2001. The Palais für aktuelle Kunst/Kunstverein Glückstadt presented a major survey of his works in 2014, exhibiting works from the artist's series Soma, Supervisions, The Japan Series and Blank in one exhibition for the first time. Andreas Gefeller has also exhibited at The Nasher Museum of Art at Duke University in North Carolina, the Nelson-Atkins Museum in St. Louis, Palazzo Strozzi, Florence, Elgiz Museum of Contemporary Art, Istanbul and DZ Bank Kunstsammlung. His work is included in important public and private collections throughout the world including Taubman Musem of Art, Roanoke, Virginia, Norton Museum, West Palm Beach, Florida, National Gallery of Cananda, Toronto and Deutsche Bank Sammlung, Frankfurt, Germany, amoung others. Three monographs of his work have been published: Supervisions (Hatje Cantz, 2005) Andreas Gefeller: Photographs (Hatje Cantz,2009) and The Japan Series (Hatje Cantz, 2011), which won Gold in the German Photo Book Award in 2012.

From Above: Andreas Gefeller
View More

Above the Pavement
View More