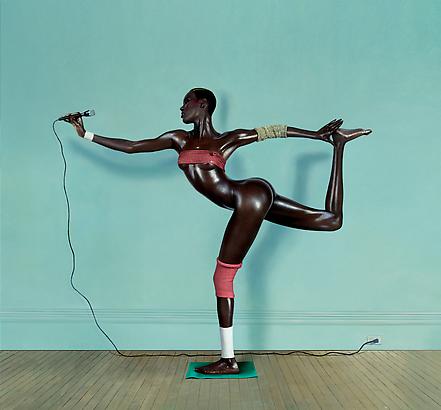 Named the best photographer in the world by Andy Warhol, French visionary Jean-Paul Goude (b. 1940) has worked as a photographer, graphic designer, illustrator, and advertising film director since the 1960s, bringing the dynamic visual vocabulary from all of those mediums into his nuanced, poly-vocal practice of collage and pastiche.

Goude presaged the technique of Photoshop years before it was invented—working only with paint, sticky tape and board to achieve the effect that now comes at the click of a mouse. Wryly dubbing his image modifications “French Corrections”—a play on the movie title The French Connection that was conceived while Goude was working as Art Director of the illustrious Esquire Magazine—he pioneered a world of artistic multitasking that has become part and parcel of contemporary existence.

In 1989, he was invited by the French government to design the annual Bastille Day parade—an epic request, which he fulfilled to its utmost by creating a sensory feast involving artificial snow, a troupe of Senegalize ballet dancers, and a marching band performing the hits by James Brown. As described by the New York Times on the eve of a major retrospective at the Musée des Arts Decoratifs in 2012, “the intense and joyous imagination of this artist — illustrator, cinéaste and advertising guru — makes him not so much a symbol of the past as a model for the future.” His distinct, vibrant personal style and his discriminating taste have also shaped and inspired many of today's most well-known talents, from the lush, vibrant, otherworldy compositions of David LaChappelle to the ironic imaginings of Ryan McGinley.

He is well known for his professional and romantic relationship with model Grace Jones—his muse of the 70s-80s, a celebrity whose fame was a direct result of his interest and cultivation—and he is undoubtedly one of the greatest contemporary imaginations alive and working today. Throughout his career, he maintained a privileged position at the fore of iconic image making, expressing an absolutely singular, generally “unorthodox” vision while channelling the zeitgeist and aesthetic of the day, from androgyny to multi-ethnicity. As demonstrated by his vivid sketches of sexualized women, his geometric drawings that look like visions of cyber-space, and story boards that might be a detailed preparation for stage or street events, his is a truly original and expansive genius.

Jean-Paul Goude's work was recently featured in an exhibition at the Issey Miyake Museum in Tokyo, Japan and at the Théâtre de la Photographie et de l’Image in Nice, France. A number of monographs of his work have been published: Jungle Fever (Xavier Moreau, 1981), So Far So Goude (Assouline, 2006), The Goude Touch: A Ten-Year Campaign for Galeries Lafayette (Thames & Hudson, 2006), and Thames & Hudson's 2012 catalog to accompany the retrospective at the Musée des Arts Decoratifs, Jean-Paul Goude.

So Far So Goude at HASTED HUNT
View More

So, Was That Kim Kardashian Cover Photoshopped
View MoreDownload PDF

JEAN-PAUL GOUDE IS STILL AHEAD OF HIS TIME
View More

A Joyous Image Maker Way Before His Time
View More

As Goude As It Gets
View More

The Goude Touch: A Ten-Year Campaign for Galeries Lafayette

So Far So Goude