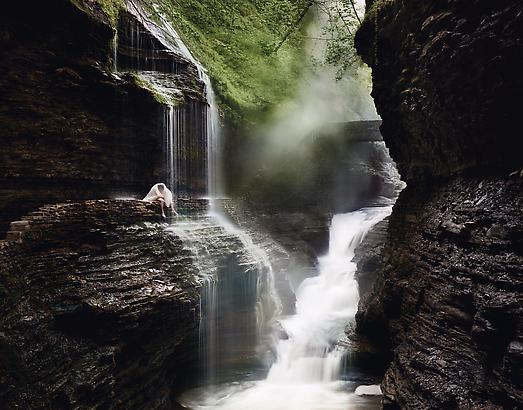 Jeff Bark’s moody, monumental photographs plumb the depths of a collective human experience in the manner of history painting’s grand masters, from Titian to Jacques-Louis David, while drawing from the tradition of still life to explore the complex nuances of earthly life on a closer, more intimate scale. Rather than relate stories of conquest or intrigue that have defined the trajectory of history—the surge and fall of nations, the struggle for religious hegemony—Bark’s dark and dreamy vision is rather closer to the ground among the soil and the roots, parsing the various dynamics of human relationships both toward one another and in relation to the mysterious, often elusive natural world around them.

Bark is celebrated both for his sensual aesthetic and for his technical mastery of his medium, which elevates the practice of landscape photography by way of a singular, unique artistry. Each of his meticulous compositions is informed by a strange, Surrealist sense of atmosphere and narrative, uniting moments of eerie calm and deep chasms of drama in an ambiguous and ghostly world that seems almost familiar, but not quite, existing just beyond the reach of consciousness. Indeed, Bark’s characters appear to have stepped out of a dream: nude or shrouded in white garments, his young men and women have porcelain-smooth skin that glistens under cool, dappled, early-evening light, and a presence that is fraught, furtive, almost animal-like. They exist in a realm of moonlit waterfalls, shadow-kissed lakes and dark expanses of forest, human figures that appear to operate as allegories of latent drives and desires—passion, anger, fear—rather than as concrete, physical beings.

Miraculously evocative though they may be, raw and organic, Bark does not leave his photographs at the whim of environmental elements. He is instead driven to shape, and then perfect, every detail of every scene he creates, building his sets with his own hands from the ground up—transforming the bare walls of his studio into a lurid dreamscape, a languorous moment of passion, or a clandestine wood.

Bark, who was born in 1963 in Minnesota and is now based in New York, is part of renowned national collections including the North Carolina Museum of Art, the Wilson Centre of Photography, the Sir Elton John Photography Collection, North Carolina Museum of Art, and the 21 Century Museum, in Louisville, Kentucky. His photographs were recently included in the group exhibition “No Fashion, Please!” at Austria’s Kunsthalle Wien, along with such international superstars as Philip-Lorca diCorcia, Erwin Olaf, Hanna Putz, Viviane Sassen, Sophia Wallace, and Bruce Weber.

The heat is on
View More

Who Is the Goldenboy?
View More

Spectrum: A Plunge into the Unknown
View More

Worth A Thousand Words: We Delve Into The Indelible Images Of Photographer
View More

Who is Who
View More

The Secret Life of The Artist And His Model
View More

Exhibition of the month
View More