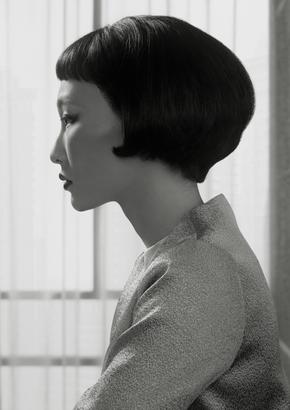 Throughout the highly stylized work of internationally celebrated Dutch photographer Erwin Olaf (b. 1959), a provocative tension reigns. Form and content are constantly in dialogue. Be it the frisson generated in the space between the polished, apparent artificiality of his surfaces, and the depth of emotion they express—or the conflict between their power to speak to universal aspects of human experience and their surreal, not-of-this-world perfection—his photographs give voice to the unspoken and bring the overlooked to light, saying everything by saying nothing at all.

Olaf’s impeccably orchestrated sets achieve a level of aesthetic consistency precisely because he builds them all from floor to ceiling, creating perfect stages on which to enact moments of awkwardness, shame, or humiliation—the grievous emotions and impulses we might all wish to repress. To that end, his images appear both candid and supremely self-conscious, natural and posed at once; and though they have the clarity and naturalism achieved only by photography, in composition, tone, and gesture they have the mood of a painting.

Silence pervades his images like a soft afternoon light, and his subjects never relate to one another, captured instead during quiet, private moments—but their gestures and postures speak volumes. His subjects are always pictures of perfection, their hair coiffed just so, makeup applied impeccably. They wear figure-constricting dresses and nicely tailored suits, and they have perfect homes to match. But in the static stillness and sterility of their environments, volcanoes of repressed emotion—desire, grief, regret—seem poised to erupt. Rather than confronting viewers, their gazes are often downcast or averted, heightening the dramatic power. They turn away from the camera or stare listlessly at the wall, conveying the raw experiences that overwhelm us all in the moments when no one is looking.

In 1991, Olaf began working with film, and the medium has remained an important element of his practice, often providing a parallel history to his photographs. Recently, for the series the Berlin, he experimented for the first time with making images outside of his studio, travelling to Germany to shoot throughout the city’s darkened, post-war alleyways and within its severe, industrial interiors. Still, even there, working without control over his environments and using sets that were not of his making, he managed to achieve a visual and emotional tenor that is distinctly, markedly his own. The resulting body of work mines the vastness of the country’s troubled past—but locates it all within the aesthetic confines of an obviously Olaf-esque production. Indeed, these spare, psychologically resonant images explore photography’s power to speak truth, investigating the subtle universalities of human existence that are frequently ignored, sublimated, or euphemized.

Erwin Olaf was the 2011 recipient of the Johannes Vermeer Award, the most prestigious Dutch award for contemporary art in honor of his entire oeuvre. He has also been awarded numerous international art and media prizes, such as the Lucie Award in 2008, Kunstbeeld magazine’s Artist of the Year of the Netherlands in 2007, and Photographer of the Year in the International Colour Awards in 2006. In 2013, Erwin Olaf design’s being selected for the national side of the Dutch euro coins.

The Perfection of Waiting
View More

Wilkommen to the Dramatic Photos of Erwin Olaf
View More

Take a Peek Through "The Keyhole"
View More

SOMETHING IS HAPPENING
View More

Photographer of The Year 2009
View More

SHADES OF LIGHT, SHINES FROM THE DARKNESS
View More

BREAKING OUT AT THE AIPAD PHOTOGRAPHY SHOW
View More

Erwin Olaf's designs for the new national side of Dutch Euro